Custom challenge coins have been used across many different branches of the military as a symbol of pride and honor; most units have their own coin specially made for each member to carry. The United States military has a long history of distinctive unit insignias stretching back to the very foundations of the country. These often colorful and elaborate insignia speak volumes about the units they identify and the men and women who serve in them. Variations on these distinctive unit insignia, along with symbolism drawn from the entire corpus of military imagery, serve to tell a special story that only insiders really understand. The secret language of challenge coins has lived on for generations, just like the coins themselves. Constructed with sophisticated techniques and quality materials, our coins will continue to tell your unit’s special story for years to come. 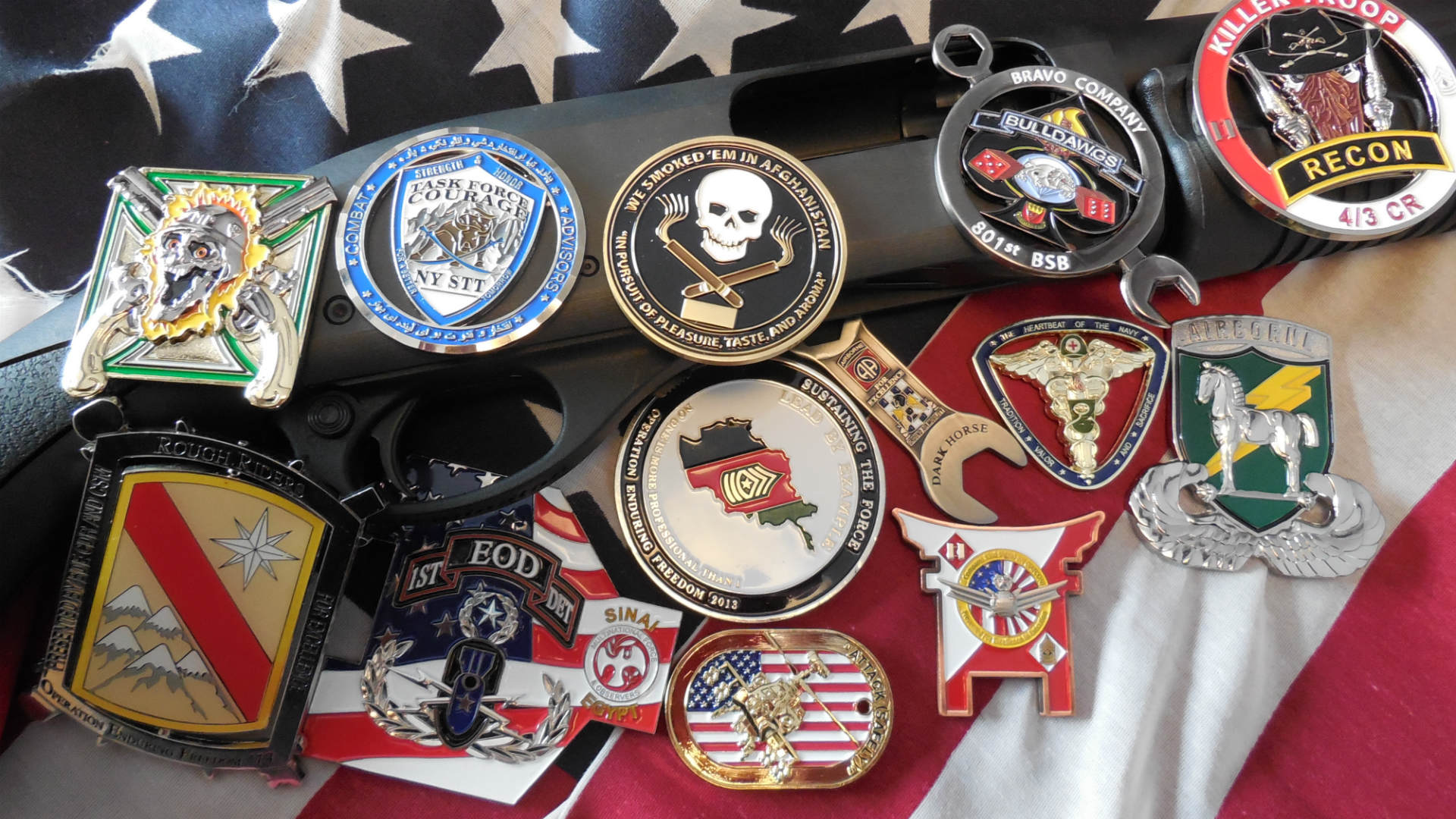 Custom challenge coins come in a variety of shapes, sizes, and plating options. Debossed detailing and durable high-gloss color epoxy finish off each coin with a unique design of your choosing.

Custom military coins are often used as a badge of recognition. Some events deserve a permanent reminder of their significance. Anyone who has ever known someone in the military understands that there are thousands of unrecognized victories every year no one ever hears about. This is to say nothing of the branches whose work is less glorious and less well-known than the frontline soldiers. Logistics and support groups deserve to be celebrated just as much as their frontline counterparts. With our custom coins, you have the chance to give back to men and women who often go unnoticed and unappreciated, not to mention the folks putting their lives on the line every day. They make wonderful tokens of appreciation for a job well done for every person who serves, no matter when, where or how.

And, of course, custom challenge coins are often used in drinking games. This tradition stretches back at least as far the Vietnam era, and some suggest, much earlier.

There have been stories of similar coins from as far back as ancient Rome. Any soldier who performed well in battle would receive a coin with the symbol of their legion on it. Most soldiers would carry the coin more as a medallion, and a prize for their accomplishments in battle, rather than spend it. Although these coins have no monetary value, soldiers these days hold onto their custom challenge coins as a token of honor, and valor. Some custom coins are used as an ID badge to prove that the holder has served with his or her unit, in some circumstances, administrators use coins as a sort of autograph or business card, although it is not very common.

The challenge that happens after a coin is tapped on the bar is more of a game to see who buys the next round of drinks. Originating in Germany, shortly before the euro was being produced, there was pfennig checks. When the check was called, whoever didn’t have a pfennig was stuck buying the beers for the rest of the participants. This practice was very popular after World War II, however, the pfennig was soon replaced by a military coin. Along with the coins, the game changes slightly as well. While at a bar, a challenger would call out a sort of coin check, and everyone with their coin would slam it down on the table. Whoever didn’t have their coin at the time was the one who paid for the drinks, if all of the challenged participants had their coins, then the challenger was stuck buying the drinks. No matter what you can imagine, Unit Coins can create it. Our custom challenge coins come in a near-endless variety of shapes, sizes, and colors.

One of the earliest stories an American using a challenge coins was during World War I. A pilot was shot down while flying over Germany, and captured by the Germans. The pilot’s commanding officer had coins made of bronze with the unit’s insignia on them to give to his men. The US pilot was wearing the coin in a leather pouch which was tied around his neck for safe keeping. After he was captured, the Germans took all of his belongings except for the coin. He managed to escape the Germans and find his way into France, unfortunately for him, the French thought he was a German spy and sentenced him to death. Luckily one of the French soldiers recognized the mark on the custom coin around his neck, and the execution was put off until his identity was confirmed.

With Unit Coins, you can bring your unique design to life and step into this venerable tradition. A powerful sense of camaraderie surrounds challenge coin culture; it symbolizes entrance into a deeper level of service that endures long after the battle is over. With custom challenge coins, you can give your unit a place in this special celebration of their achievements and the achievements of service-people throughout the United States. Whether you keep them as treasured heirlooms or trade them for others, your unit coins will continue to represent your achievements for generations to come.

There are no limits to the shapes and sizes that the coins can come in. There are coins in the shape of stars, dogtags, arrowheads, and even shields. Depending on your design, our talented designers can work to produce nearly anything you can imagine. Check out our custom coin gallery for a examples of just how colorful, detailed, and unique your coins can be. Custom numbering, personal laser engraving, full-color epoxy detailing and more serve to make your challenge coin as unique as the unit it celebrates. Let Unit Coins help you create your custom challenge coin today. We are an American veteran-owned and operated company that takes pride in everything we do. If you ever have any questions about your Unit Coins order, we are there to answer the phone personally. We love to hear the stories behind our coins, and truly relish the challenge of a particularly large or intricate coin. Give our custom challenge coin guide a look for details about design options and pricing, then give us a call for a free estimate. We are glad to help!

Thank you. I have received the order yesterday and they look great. I
appreciate your work.

Heather,
I received the coins today. They look great.
Thanks!

Good morning Heather, thank you very much for the coins they look perfect. Thank you for everything.

I have received the two boxes. I thank you very much for the quick turn around and support. The coin is outstanding and will be of great personal value to all that receive it.

Thank you Heather very much for the coins. I was home on leave and brought those with me forward so I can hand them our during a formal sit down with the unit once we are home soon in the near future going through demob station. They are incredible.

Heather,
Ma’am, today 29 September I received the coins that you shipped to us. I just want to tell you that they look AWESEOME! Everyone loves them…they are a little smaller than we wanted which was my fault since I changed it but they still look great. I also want to take this opportunity to thank you guys for all the patience and quick progression that you all performed. I am going home this Sunday so I will def pass on your company to the new personnel coming in. Thanks again for all your help. I’m sure we will do business in the future. Have a great day and ill talk with you soon.

Heather,
I received the coins today! This is awesome! Thank you so much!

Heather,
We received the coins and they look great!! Thank you.

Thank you Heather I much appreciate your continuous efforts on this for me. It has been a pleasure using your company to do these coins for me. Truly with sincerity your customer service, rates highly on my account and I will pass on to other fellow friends your information so they too may use your services.

Heather,
The coins are a awesome. Thank you and your company so much for being so quick and professional but personable.

I am the footer call-to-action block, here you can add some relevant/important information about your company or product. I can be disabled in the theme options.
Get In Touch
Copyright Unit Coins - Web Design by Battalion Advertising - All Rights Reserved
Back To Top
×