1. Rules of the coin game must be given or explained to all new coin holders.

2. The coin MUST be carried at all times. You can be challenged for it anywhere, at any time. You must produce the coin without taking more than 4 steps to produce it. When challenging, the challenger must state whether it is for a single drink or a round of drinks.

4. Failure to produce a coin, for whatever reason, results in a bought round or single drink (whatever the challenger stated). This type of transaction could be expensive, so hold onto your coin. Once the offender (coinless challengee) has bought the drink or round, they can’t be challenged again.

5. If all that are challenged produce their coins, the challenger loses and must buy the drinks for all respondents. This too can be expensive, so challenge wisely.

6. Under no circumstances can a coin be handed to another in response to a challenge. If a person gives their coin to another, that person can now keep the coin — it’s theirs!!! However, if a person places the coin down and another person picks it up to examine it, that is not considered giving and the examiner is honor-bound to place the coin back where they got it. The examiner can’t challenge while they hold another’s coin. After negotiating a “reasonable” ransom”, the examiner must return the member’s coin. 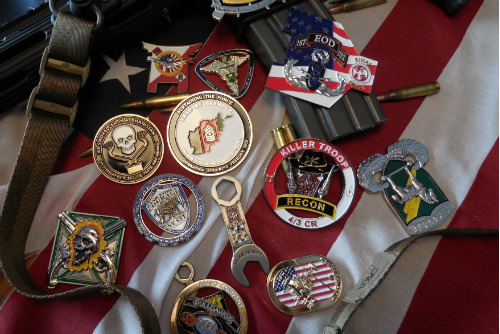 If a coin is lost, replacement is up to the individual. A new coin should be acquired at the earliest opportunity — losing a coin and not replacing it doesn’t relieve a member of his or her responsibilities. This is especially true if your fellow Comrade know that you traditionally carry a coin.

8. There are no exceptions to the rules. They apply to clothed or un-clothed. Four steps and an arms reach are allowed.

9. A Coin is a Coin. They are not belt buckles, key chains or necklaces. Coins worn in a holder around the neck are valid.

10. The coin should be controlled at all times. Giving a coin to just anyone is like opening a fraternity to just anyone. It is an honor to be given a coin, let’s keep it that way. A given or awarded coin is of more personal value than a purchased coin.

11. The above rules apply to anyone who is worthy to be given/awarded a coin, has a purchased coin, or who is known to be a previous coinholder.