This month’s featured challenge coin celebrates the accomplishments of the LaFayette Fire Department’s chaplain corps. Like Fire Department chaplaincies all over the country , LFD’s spiritual leaders make sure that the heartfelt needs of its brave firefighters are served so they can continue to serve the people of their city. Though they are often instrumental in preventing tragedies, firefighters often see tragic events nonetheless. Dealing with the aftermath of intense experiences requires the help of dedicated people willing to help carry this burden. The Lafayette Chaplain’s Coin is another example of the custom challenge coin’s infinite versatility. Whenever you need to celebrate the accomplishment of a hero in your life, consider a challenge coin.

Nobody seems to agree on the origins of custom military challenge coins.

Commemorative coins are as old as forging metal. If you trust Aristotle and Pollux, the first custom military challenge coin manufacturer was Hermodike of Kyme, the wife of the more famous King Midas.  In fact, for much of the early history of coinage, the primary purpose of coins was more along the lines of what we do with challenge coins today – they were used to commemorate great people and celebrate great achievements. As priestly objects, the forging of coins was a sacred endeavor. It involved creating an image that was meant to last, built from special materials by special people. We wouldn’t go all that far about our humble little operation, but we do understand the magic of turning an inert hunk of metal into a work of art. It’s a fantastic process going from the drawing board to the mint to the hands of men and women who have earned them with blood, sweat and tears.

It was probably just as magical for the Renaissance artists who started issuing double-sided portrait metals during the sixteenth and seventeenth centuries. Much like the challenge coins of today, these portrait metals could be put to use for  any number of occasions, from births and deaths to the opening of important buildings to the immortalization of academic accomplishments. Their creators put dozens of hours into each portrait medal, which might be kept in a family for generations or traded between collectors, much like the custom military challenge coins of today.

Custom Coin Manufacturers Through The Ages

What it is about coins that fascinates people everywhere? There must be something, because we have been obsessed with these little pieces of metal for thousands of years. It must be something inherent in the species. Ever since we found out how to alloy metal and strike images into ingots, coins have held a unique place in the human imagination.

What we typically think of as challenge coins today are thought to have originated during World War I. The folklore would tell you the story of a young Ivy Leaguer volunteering for the brand-new, practically experimental flying squadrons, full of swagger and mettle, ready to live a little, even if it meant dying for the country. This was a different age, where the children of the wealthy felt a debt to their country and culture – an impulse, perhaps positive, left over from the chivalrous peerage of England.

Our young Ivy Leaguer served in a squadron commanded by well-to-do lieutenant. This lieutenant, a man of measurable largesse, had bronze medals struck for his airmen in thankfulness for their valiant desire to serve. These medals were cherished by all the airmen, including our young Ivy Leaguer, who kept his in a pouch around his neck. The thoughtfulness of that lieutenant and the appreciation of the young Ivy leaguer would save the latter man’s life.

During a cloudless night on the Western Front, our young Ivy Leaguer’s plane was seriously damaged by ground fire and forced to crash-land. It was not long before the Germans descended on who we can now call “our hero” bound up in the wreckage of  his tractor scout, incapacitated. Stripped of all identification save for the coin secreted around his neck, our hero was placed in holding pending being transferred for integration.

Fortunately, it was not long before an artillery barrage through his captors’ little forward base into chaos. Taking advantage, our hero bolted toward free France, passing through the terrifying gauntlet of no-man’s land with no little effort, managing to evade death until he arrived at a French outpost. Mistaking him for a German spy, the French soldiers made haste to execute him. Desperate for any way to prove his innocence, our hero finally remembered the medal given to him by that generous lieutenant. He clamored to show it to French soldiers at the last moment before he was overtaken by a hail of rifle-fire, ripping it from his neck and casting at the feet at his confused allies. Miraculously, one of the soldiers recognized the squadron insignia emblazoned on the coin and stopped his fellows from making a fatal mistake in the nick of time. Our overwhelmingly relieved hero was then offered a hot shower and a bottle of wine for the trouble, and roundly lauded for his notable grit and grace (almost) under fire. 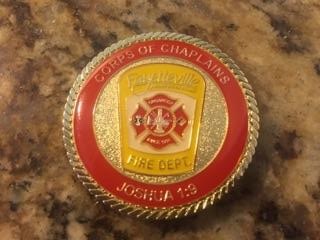 This month’s custom challenge coin celebrates another kind of grace under fire – specifically that shown by the chaplain corps of the Lafayette, Louisiana fire department. Just like challenge coins from time immemorable, this coin etches the accomplishments of the men and women who serve the spiritual needs of Lafayette’s fire fighters in one of the busier fire districts in the nation.

The obverse features Maltese cross with fine detailing on a tan field bordered in yellow. Within that border, we find “Fayetteville Fire Dept.” “Corps of Chaplains” and “Joshua 1:3” is rendered in debossed lettering on a red outer circle. A fine roping edge finishes the face.

The reverse features the inscription “Awarded for Godly service to others” and “John 15:13” on a blue outer circle. The interior of the face plays host to the black silhouette of a firefighter kneeling before a cross on a textured starburst background. This face also features the same roped edge as its counterpart.

Whether you are looking to design a custom challenge coin for a person in military or civilian service, you can stand confident knowing you walk the footsteps of a tradition that stretches back to antiquity. You can also trust our custom coin design team to create a unique work of art that will tell a story for years to come. Unit Coins creates custom challenge coin designs for anything you can imagine. Call us today for a free consultation.